The Imperial Shadow has fallen over your world - Galaxy Black

The human race is gone but humanity lives on, it’s culture and genome infecting a million worlds.

Nothing is ever forgotten  Even in a Collapsing Universe; the struggle of Law and Chaos goes on. 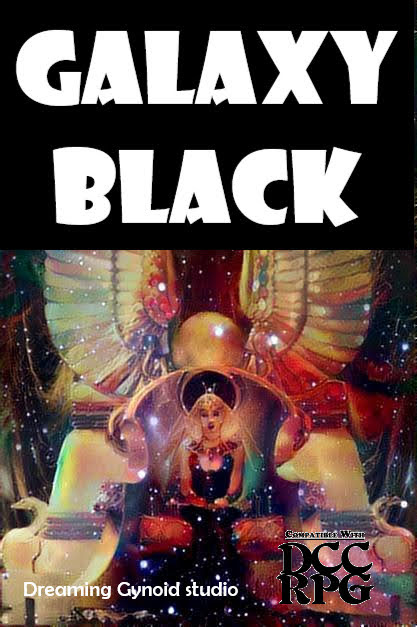 What is Galaxy Black?

“Galaxy black is a science fiction and space fantasy toolkit for your DCC RPG game.  A lightly gothic semi-humorous fantasy of the space future that was, and could still be, one day.  With magic, bright colours, and deep implications.  For everyone.

With Galaxy Black you should be able to fake your way through your favorite SF franchise without any problems at all – from golden age space opera to grotty modern post-cyberpunk, from the gutter to the stars, and all points in between.

Galaxy black is also, for those who want it, a setting, showing one example of how using all the elements in the book (and there are a lot of them!) together can work, using a traditional golden age Galactic Empire as a model.

Galaxy black is generators!  Make worlds, cultures, aliens, gods, and technology, use the campaign frameworks and adventure generators to inspire or map out a whole adventure, a whole campaign!

Fully compatible with the DCC RPG and its many spawn, available from Goodman Games.

Galaxy Black I Characters & Classes introduces the core classes of Galaxy Black to supplement (not replace) those used in DCC, from the undead slaying space knights of the celeste numina to alien bounty hunters who stalk their prey with biotech

EXTENSIVE alien creation tables allow you to create a single alien or a whole world of them, customized and tweaked with the shaper tables, and all manner of options. Over 4300 combinations are possible!  Judges can create whole alien armies and players distinctive gene tweaked unique entities with the same system.

Legacies tables to get the band of voyagers together quickly with common bonds they have inherited.

Extensive background about some of the more alien clades of the Empress Imperium, the engineered Insectivroids, the sun castes of the Saurids, and much more!

Use as much, or as little, as you wish in your campaign. All options are full compatible with one another while remaining modular.

Note: this is only the first book of Galaxy Black. You will need the DCC RPG rules to play;  Those seeking a highly psychic or magically oriented game will need Galaxy Black II Magic, Metaphysics, and Psychic Powers, coming in April.

Now Available from the Dreaming Gynoid store and Drivethru RPG

Posted by Gwendolyn Harper at 11:15 AM

Seek what has come before (Blog Archive)